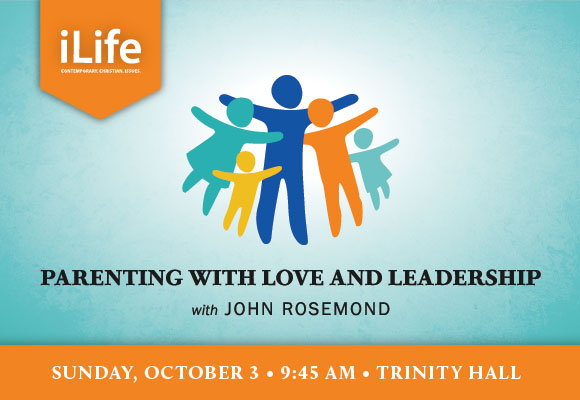 Nursery and childcare (up to 5th Grade) with dinner is available by reservation. Contact Stacy Hamilton (shamilton@trinitypca.org) for reservations.

John Rosemond has worked with families, children, and parents since 1971 in the field of family psychology. In 1971, John earned his masters in psychology from Western Illinois University and was elected to the Phi Kappa Phi National Honor Society. In 1999, his alma mater conferred upon John the Distinguished Alumni Award, given only once per year. Upon acceptance, he gave the commencement address.

From 1971-1979, he worked as a psychologist in Illinois and North Carolina and directed several mental-health programs for children.

Presently, his time is devoted to speaking and writing. John is syndicated in approximately 225 newspapers nationwide. He has written eleven best-selling parenting books. He is also one of America’s busiest and most popular speakers and most certainly the busiest and most popular in his field. He’s known for his sound advice, humor and easy, relaxed, engaging style.

In the past few years, John has appeared on numerous national television programs including 20/20, Good Morning America, The View, The Today Show, CNN, and CBS Later Today, as well as numerous print interviews.

All of his professional accomplishments aside, John is quick to remind folks that his real qualifications are that he’s been married to the same woman for over forty years, is the father of two successful adults, and the grandfather of seven children…make that seven well-behaved grandchildren.